The local coordinator, three other volunteers and I took two buses on the way to the orphanage. It takes around an hour to get there.

Daya Nivasa orphanage (they call it also a school) is raised by the Christian nuns, connected in some way to Mother Teresa 6 years ago.

It’s called the “orphanage”, while the majority of the kids have one or both parents, who don’t want or unable to take care of them at home. The children became “orphans” because of the parents … disappear. There are cases when such kids are left in the hospital or on the street… WTF? (I’m researching the reasons for this and will update this post).

Each morning in the orphanage the staff starts with meditation. I knew about it but nevertheless was impressed. The nun leads the meditation and it includes some Christian prayers, which I, being an atheist, purposely skipped. In any case, the meaning of the meditation is to focus on giving love and care, which is true for me, so I felt comfortable. 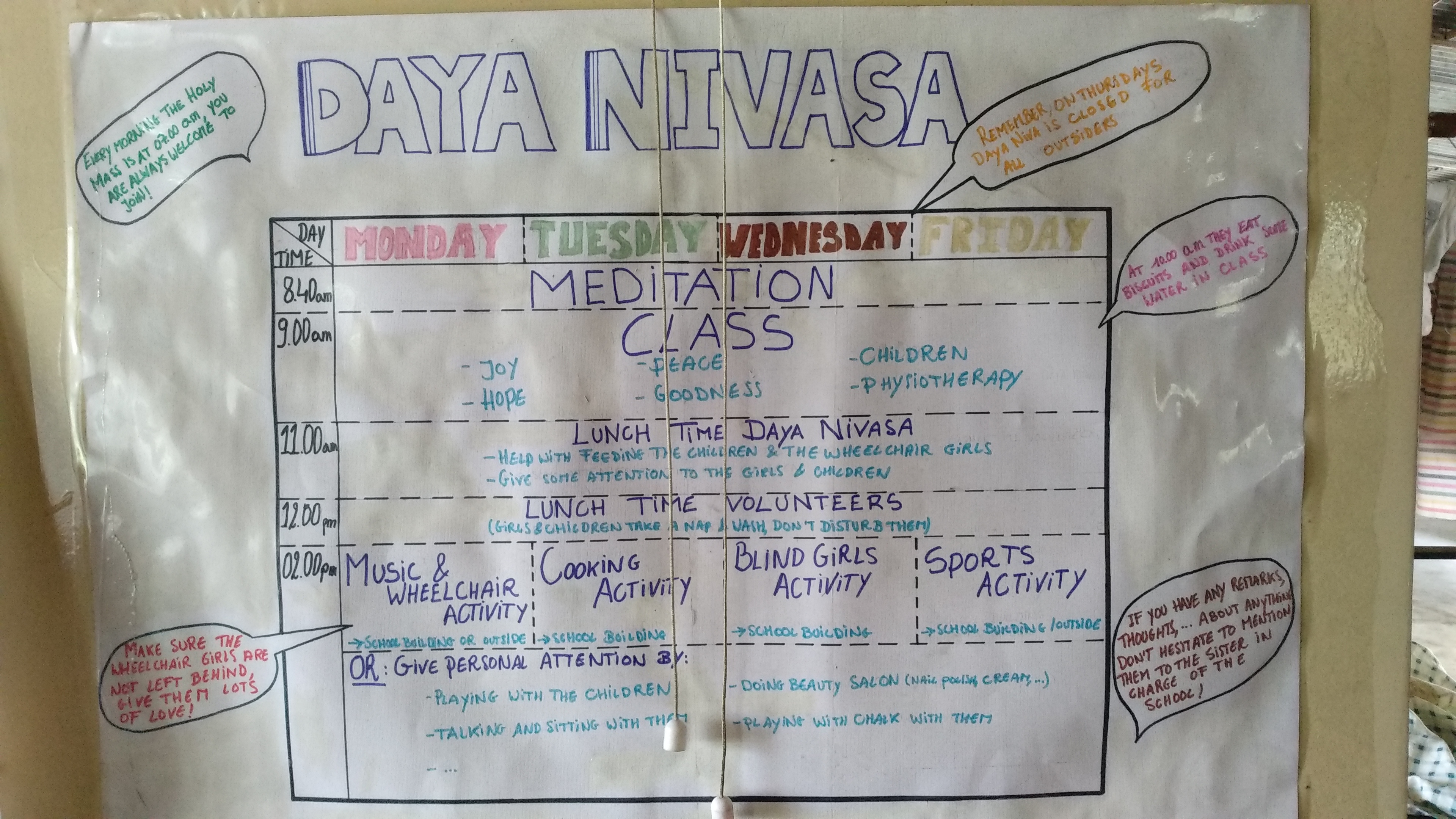 Disclaimer: I will NOT publish any photo or video from the orphanage except the one above, for which I received a permission. They prohibit taking photos or videos inside the orphanage respecting students’ privacy and I totally agree with this policy.

We locked our bags in the lockers and put on the aprons. I stepped into the yard without any expectation, knowing only it might be shocking in the beginning… It was not shocking, at least I did not freak out. But it was f-ing hard! 112 girls/women and 3 boys with various disabilities of different levels: some with a physical disability like Cerebral Palsy, some with mental like Down syndrome, some with a combination. I don’t diagnose and there could be other disabilities.

Rachel, a Canadian woman from Toronto, is running the place. Six years ago she volunteered in a similar orphanage in India and was proposed to “copy” it to Sri Lanka. She is an incredible person, full of compassion, love, and positive energy. I like that she relates to the ladies in the orphanage as “students” and to the orphanage as a “school”. She hugs and talks to the students all the time.  Rachel gave us the short instructions and asked nicely each volunteer to do a particular task.

My first task was to play with a group of 6-7 students. Another volunteer did the same with her group in the same class. We swapped the games we had between us to keep the students engaged. The task was not easy at all in spite of the fact that I do have the experience to play such games with my coaching clients kids with ADHD. The difference between ADHD (which is not an illness) and the mental illnesses presented in the orphanage is huge. Maybe I’ll write about the similarities and differences between them in another post. Anyway, my previous experience working with children with ADHD and working with groups in school helped, but still, it was challenging for me to hold the students engaged all the time. I needed to stretch myself to be more assertive and creative and overcome the situations when the students are getting up and storming out of the class or start crying or hiding part of the games with a naughty smile. I think I did well and Rachel complimented me later as “being comfortable on the first day”

Next task was to feed the students in the wheelchairs and it was very emotionally intense for me… I was feeding a student, which was paralyzed almost completely. At some point I started to play “airplane is coming” and she laughed beautifully, waiting for the next “flight”. Focusing on her facial expressions and trying to ignore the smell in the yard, I was touched to tears by feeling like a parent to a baby, which started eating with a spoon, but can’t yet eat by herself and need someone to feed her.

When we had our two hours break, I understood why the break is so long. I was so tired and exhausted!

After the break, Rachel conducted the cooking class and asked me and another volunteer to supervise the students. It was just AMAZING and INSPIRING!

The students were preparing … a soup and crepes with banana filling and whipped cream. They were cutting onions and garlic, frying them, mixing with other ingredients in the blender, preparing the dough and frying the crepes, frying bananas and making the whipped cream. And all this by themselves with general instructions from Rachel and us and some assistance to reach the stove (it’s hard to reach the stove with a stroller or a wheelchair)! I was totally inspired and learned from this experience a lot. I also do the cooking classes with my ADHD clients to give them the experience of success, but until today it was squeezing orange juice, cooking simple soup or rise. Cooking class in the orphanage taught me to trust in one’s abilities even more.

I was tired and exhausted, but also totally satisfied at the end of the day. If I returned home today, I would say that the trip was worth it.

We returned to our accommodation, I had a nap and ran after the supper to clean my heavy head. Running in Kandy is a total mess. I hope I’ll find a nice park